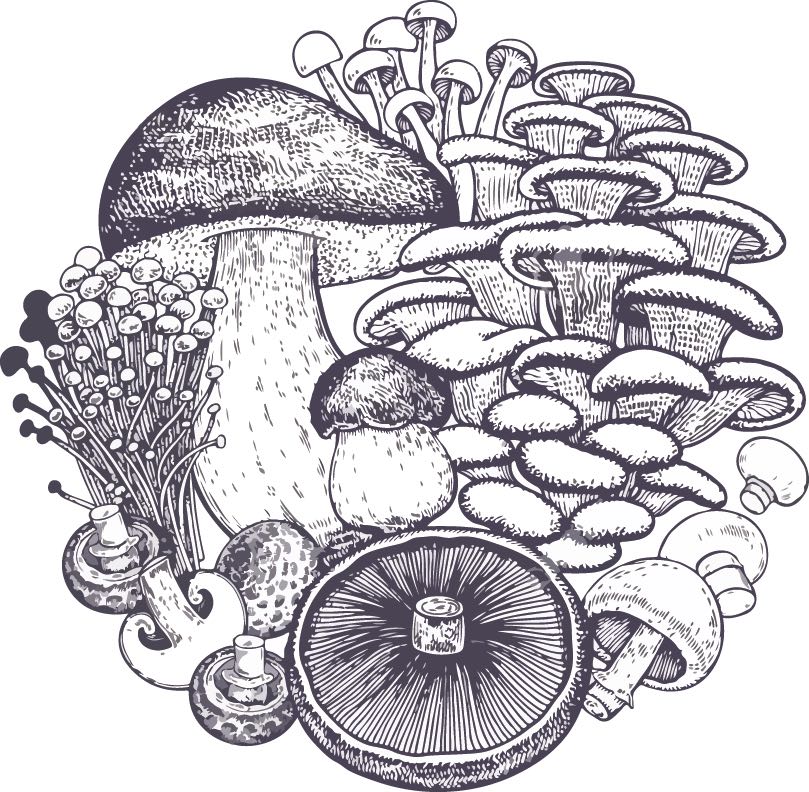 The story of fungi

Fungi (Kavak in Sanskrit, Puncai in Tamil, Hongos in Spanish),  are very peculiar organisms and for a long time scientists had a hard time classifying them as they are neither plants nor animals and very distinct from bacteria. Finally, fungi had to be declared a separate kingdom altogether in the five kingdom classification of life forms (See Lynn Margulis: The 5 Kingdom Classification). Fungi can be both single celled or multi cellular, have a thick cell wall (characteristic of plants), and obtain their food from other life forms (like animals). They grow as filaments called mycelium branching out into dense networks that can be microscopic or spread out under an entire forest. They are in fact nature’s neurological network.

The largest living organism today is a yellow brown Honey fungus (Armillaria Oregon) spread over 10 sq. Km in Oregon and is believed to be over 8000 years old.

A modest spore grows into a dense mycelial network

Fungi, like bacteria are primary decomposers. Nature has designed them to recycle the biomass into available energy for growth of new life forms. Fungi evolved about 600 million years ago and grew and diversified around 400 million years ago, around the same time as plants, feeding on the diverse high carbon plant biomass. Compared to bacteria, fungi grow relatively much slowly and feed primarily on carbonaceous biomass which makes them an excellent decomposer for high carbon biomass and a primary nutrient recycler in forests. This is the reason why fungi are dominant in perennial plant systems.

Thus, their study is not only important from an ecological point of view but also for practitioners of new systems of agriculture, permaculture and ecological farming, which require a synthesis of perennial and annual food systems. The fact that they consume massive amounts of carbon and store it in the soil as humus, is specially interesting with the increasing carbon concentration in our atmosphere and the big challenge of finding ways of dealing with it. Fungi can help sequester carbon in the soil more effectively than any technology of today and more efficiently than any technology of the future.

A special kind of fugus called Mycorhiza fungus, found in association with roots of about 97% of all agricultural crops not only provide nutrients and water to the plant, their web like structure acts as extensions of plant roots themselves.

The Hidden Life of Trees by Peter Wohlleben, describes the poetry of life in a forest, how trees interact, share and collaborate through the massive fungal networks under the soil.

Besides all this, the fungal webs act as filters for water, hold soil together and retain nutrients in the soil. This discovery is a revolution in the field of soil sciences telling us why ancient cultures respected the spirit of the soil and why earth is truly the mother.

Just a teaspoon of native grassland soil can have over 1 billion bacteria of about 10,000 species, several miles of fungi, thousands of protozoa, 20-30 nematodes of over 100 different species. It is believed, in fact, that more than half of the biomass of a forest is under the soil in the form of the microbial life. (See Dr. Elaine Ingham: The Soil Food Web)

The study of fungus reveals the secrets of the microbial interactions in the soil and reminds us that the soil is alive.

Life cycle of a fungus

It all starts from a microscopic spore.

The spores are the seeds of a mushroom. When spores find the right conditions, they germinate and a small thread like structure emerges from it. This is called a hypha. The hyphae of two compatible spores grow towards each other until they unite and form the mycelium which grows vigorously and branches out in search of food. Once the mycelium reaches maturity it fruits into what we call mushrooms. Thus, mushrooms are the fruits of the fungus!
And the seeds of this fruit are the spores. The spores are found underneath the head of the mushroom. The shape of the mushroom is in a way protecting the spores, the possibility of the next generation of the fungus.
The mushroom slowly grows from a small protrusion into a developed convex shape protecting its spores. The convex head slowly opens up into a concave shape thereby releasing its spores in the surroundings. These spores stay dormant till they find the right conditions to start the cycle all over again. 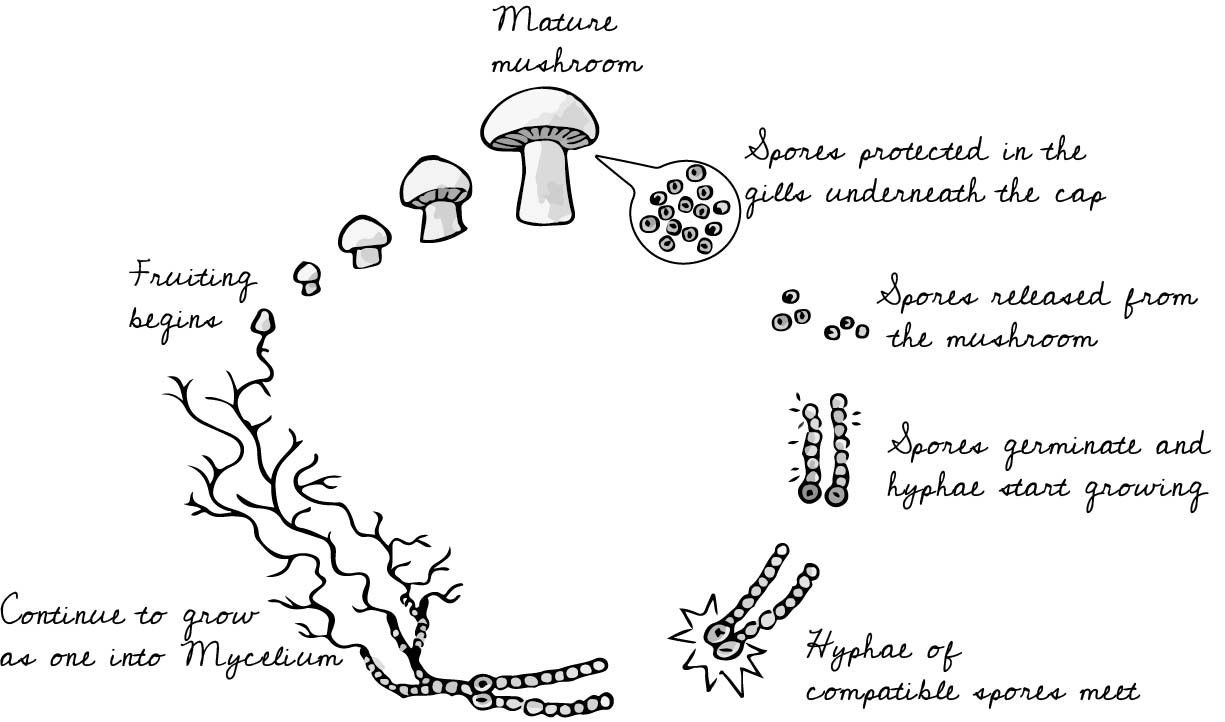 Depending on how they gets their food, fungi can be of four different kinds-

However, all of them obtain their food through absorption. Fungi release organic acids when they come in contact with their food, digest it outside their bodies and absorb the digested food through their mycelial strands.

Fungi have been used as food since thousands of years, even before agriculture came into existence. Fungus is present everywhere and with the right conditions, it mushrooms into a healthy source of nutrition for animals and birds. However, all wild mushrooms are not edible and some can even be highly toxic. Mushroom foragers have to have the precise knowledge of which mushroom to harvest, when and where even, to be able to consume it. Mushrooms are about 90% water and thus they absorb toxins directly into their bodies. This makes them excellent detoxifiers for natural systems and therefore one must be careful of where the mushroom was growing before consuming it.

The edible varieties of mushrooms provide a high protein food source and can be eaten after cooking. They may be indigestible if eaten raw due to their tough cell walls.

For beginners, it is easier to start with buying grain spawn from a reliable source. Grain spawn can be made on a small scale as well but requires extremely clean conditions.  A grain spawn is grain (typically barley or wheat) kernels covered with mycelium. 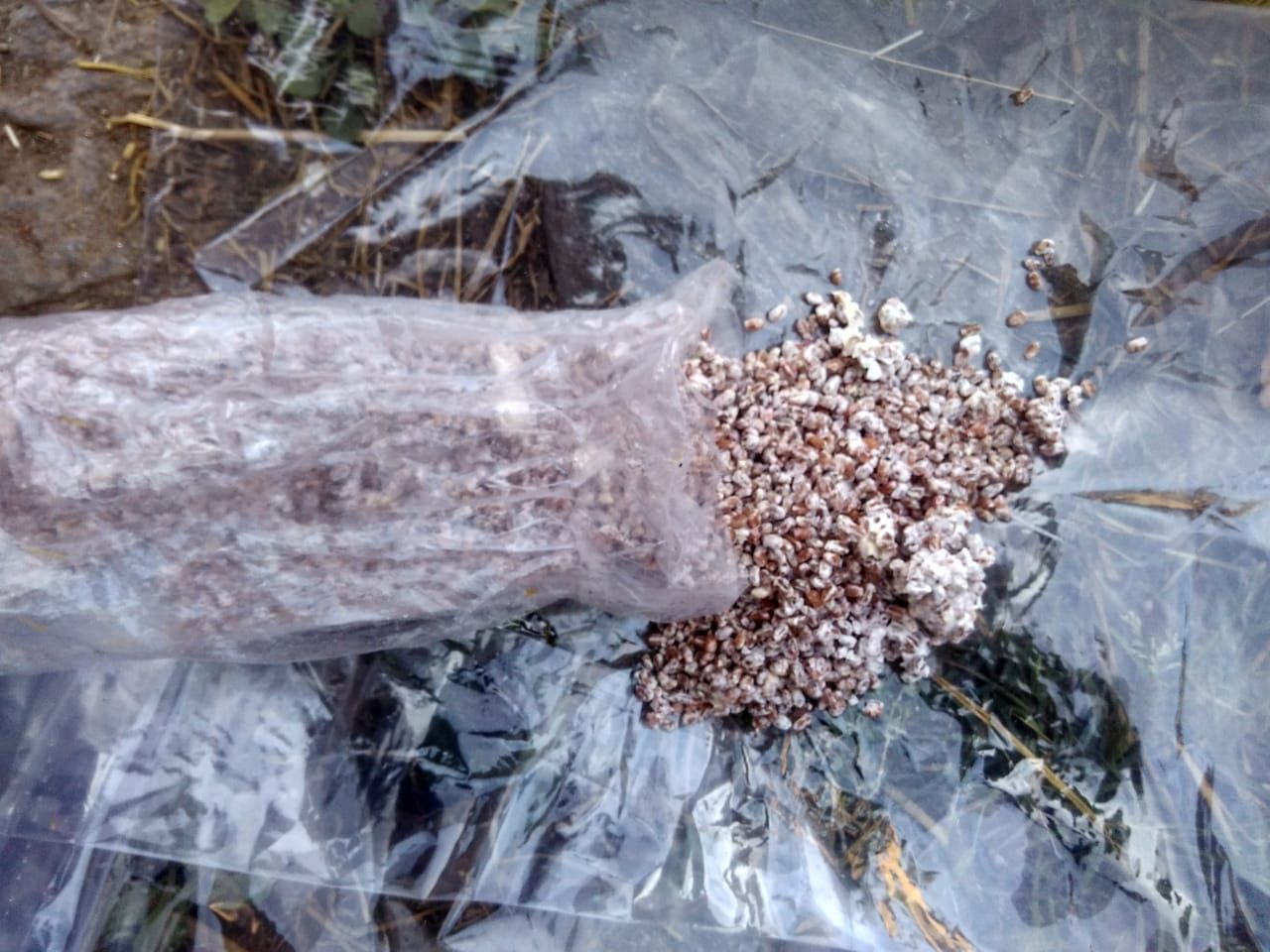 For substrate, it is easier to start with wheat, barley or rice straw as they are finely chopped (if threshed), thereby increasing the surface area for mycelial growth. Ideally the substrate should be of different sizes, but the smallest particles will help in stimulating growth and allow the mycelium to catch on (leap off) very quickly. The larger particles provide fruiting platforms or nutritional bases for the thick fungal strands (rhizomorphs). Different kinds of substrates have been tried and proven to work well. Farmers can use any farm waste (preferably high in carbon) and try mushroom cultivation on it. Besides wheat and barley, we have tried corn stalks and soybean plant waste and they work really well.

The substrate has to be pasteurised so that no contamination exists and no other fungus or bacteria competes with the desired fungus. Normally, mushrooms growers treat substrate with chemicals for disinfection before adding the inoculum.

We simply boil the substrate in hot water (over 70 deg. C) for over an hour to kill any bacteria or fungus present in it. This is a much better method avoiding any chemical residue in the substrate which will eventually end up in the mushroom.

The substrate is then left to dry but only until 50% moisture remains. The structure of the substrate should be similar to good soil, for both air and water to stay. The grain spawn is then added to the substrate filled in plastic bags. Buckets can also be used for this purpose. Our trials with organic materials like cotton and jute did not work well as they did not retain moisture inside and dried up the substrate very quickly.

The rate of incolaution needs to be just right and the mushroom grower will know the right amount with experience. Too less inoculation will prevent the growing strands from mating quickly. Too much inoculation will create very dense web preventing further growth. Around 20% inoculation by weight i.e. 200 gm of grain spawn in 1 Kg substrate works well. But every mushroom grower will have to find their ideal number by experience.

The bags are hung or kept in a clean room without disturbance. Fruiting can be observed within 30-45 days. Once the mushroom caps are flat (moving from convex to concave), the mushrooms can be harvested at the base. This is the peak of the maturity for the mushrooms. After this point, mushrooms start losing the spores and their energy. The fruiting is also called a flush. Multiple flushes can be obtained from a bag if moisture and hygiene are maintained.
The substrate after the mushroom harvest can be added to a compost, or used for mulching trees.  Some farmers also mix the used substrate with cow feed and the benefits of this on the health of the cow and the milk production are documented in some studies.

Mushroom cultivation is easy and becomes more and more effective with experience. For small scale farmers, it is a great source of proteins and minerals, adding diversity to their diets and their source of income. Mushrooms can be sold fresh (better in a paper bag than plastic, as paper absorbs the moisture being lost by the mushroom after harvest) or dried. Dried mushrooms retain their flavour and nutrition for over a year if kept in a dry and cool place.

Mushroom cultivation is a way of diversifying a farm, learning about fungus and tasting this wonder of nature, unadulterated. 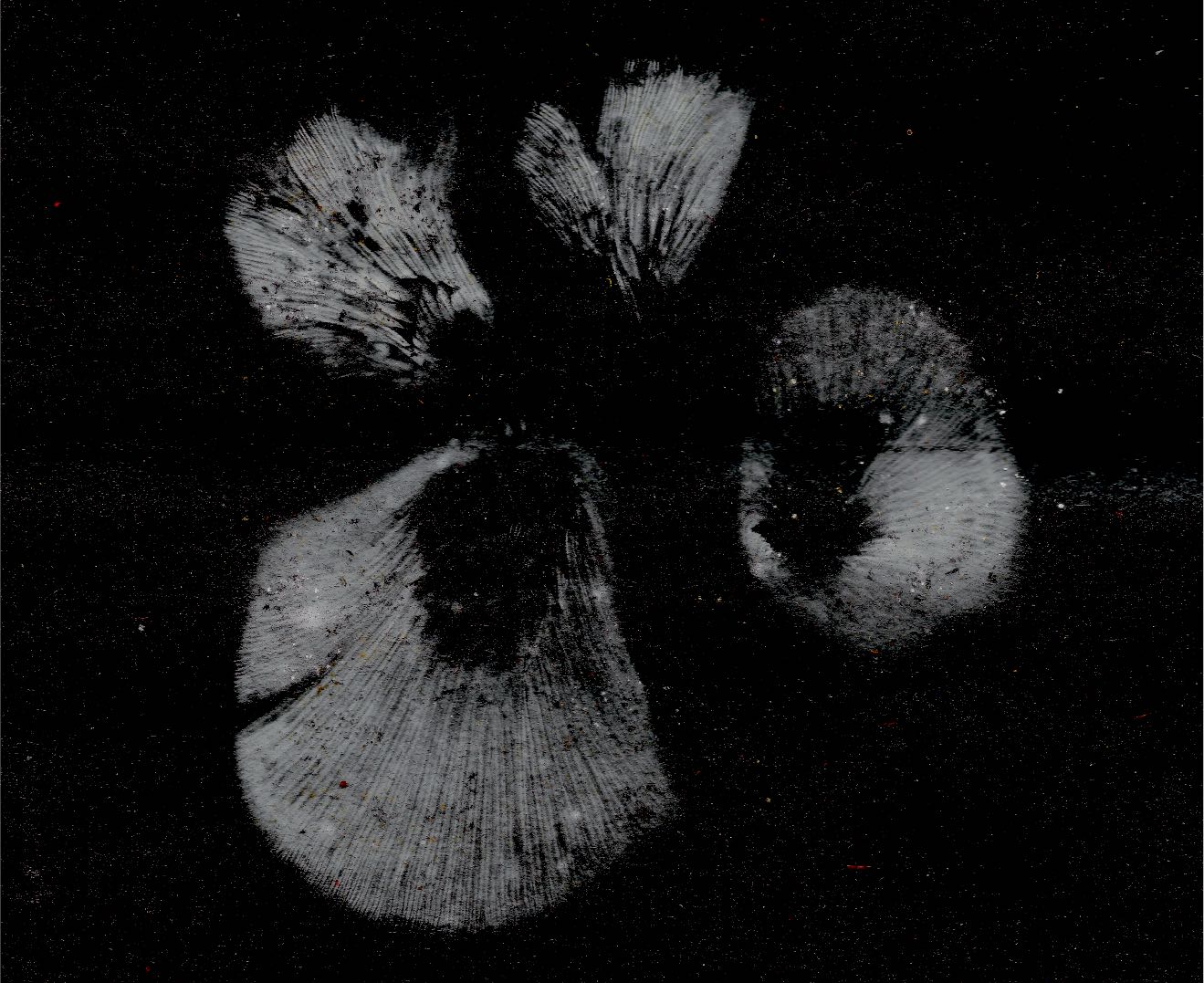 A spore print of Blue oyster mushroom grown by us, on black paper made in November 2018. This was a part of our trials to make our own spawn. We were successful in creating the spawn but good quantities and consistent quality need highly sterilised environment which was a challenge without expensive installations.

Mycology is a fairly new field of study and we have only scratched the surface in learning about the immense potential fungi offer in maintaining ecosystems. Ancient scriptures from both eastern and the western world too elucidate the myco-anthro relationship but very few have dared to translate this knowledge.

Paul Stamets is a pioneer in mycology and is working on some fascinating solutions for mycoremediation and mycofilteration and making the knowledge about fungus accessible to all. His books are an amazing resource to the awesome world of fungi and mushroom cultivation.